Exchange: the Irish and Normans mingle at the fair 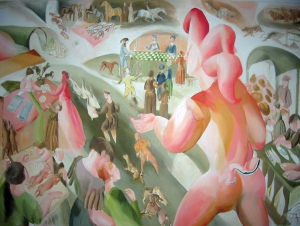 In the grounds of St. Mary’s Church, a foreign juggler sets to work, to entertain the crowds attending the May fair in Ros.

The ground is undulating and he is on stilts. He can see some pretty girls – a redhead walking with her Norman boyfriend….But the beasts stampeding through the Earl’s gate into the market area have a wild look, particularly the hairy swine. He would have to avoid them.

The Italian bankers and the tax collectors are there however, ensconced behind their chequered cloth. They will go home rich at the end of the day. He hopes that his friend – the musician with the yellow breeches – will collect for them both, and in the meanwhile, he must not break his neck….

The panel shows imported slaves being led to the market, joined by dealers arriving with hunting dogs, horses and falcons. Ros depended heavily on produce from the surrounding hinterland. Sheep and corn from the manorial farms and Cistercian granges ensured that the town remained wealthy and influential. Even the Black Death in 1345 failed to entirely extinguish her stellar ranking amongst the competitive ports of Leinster. The dreams of William and Isabel had been amply fulfilled.

Evening: the lighthouse at Hook Head

Perched fortress-like over some of the most treacherous waters in Ireland, the lighthouse tower was built by the Marshals about 1207, perhaps after a design seen by William at Acre while crusades. The Welsh monks of Rinn Dubhain had kept a bonfire blazing to alert shipping for many countries. The Vikings, finding such activities useful, did not disturb them. The Norman lighthouse, virtually unchanged, functions to this day. 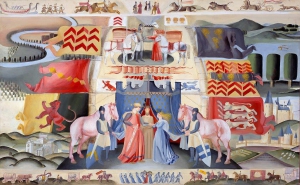 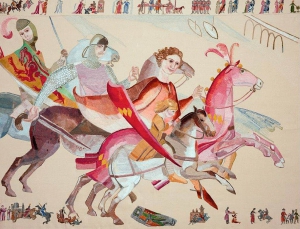 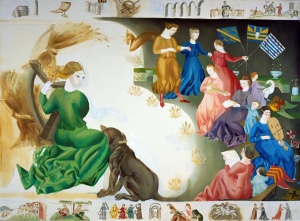 Battles in the Kingdom of Ossory 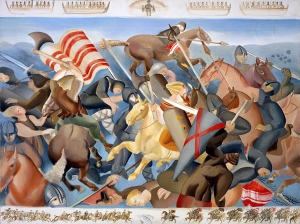 The Kings of Ossory, MacGiolla Padraig, who presided over part of a region now known as Kilkenny, was a mortal enemy of Dermot MacMurrough.

This King had Enna, Dermot’s promising young son and heir, blinded, and had been instrumental in driving Dermot from his capital at Ferns. Now that help had come Dermot had revenge on his mind. His army, numerically smaller than that of the enemy, made their way to Freshford in Ossory in the summer of 1169.

The panel shows Dermot in the thick of battle. Aged sixty four, he is clad in his saffron trews and is carrying an oblong Celtic Shield. His mount is a small active type of dun horse favoured by the Irish. He is flanked by a Norman, bearing a Fitzgerald kite shaped shield. Behind them flies the pennant of the Prendergasts and above, showing that he had recovered from his adventures in Wexford, floats the banner of Robert de Barry. Underfoot, one of the reluctant Norse conscripts lies dead. The loss of life is frightful but Dermot is avenged.

The Siege of Wexford 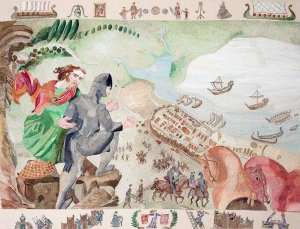 Dermot MacMurrough, King of Leinster, and Robert Fitzstephen, with their combined forces of Irish, Norman, Welsh and Flemish combatants, bear down on the first target of their campaign, the Norse town of Wexford.

The Leinster town had been promised by Dermot MacMurrough to the Norman leader Robert Fitzstephen and his half-brother Maurice Fitzgerald during negotiations in Wales. There were some striking weaknesses in the fabric of this offer. Dermot did not own the town. It had for 300 years been a Viking town, a city state, quiet independent and owing only token dues to the Irish Kings of Leinster. It’s economical and religious life was rooted outside Ireland to a great degree.

In the panel, Dermot and Robert Fitzstephen halt on high ground above the town and discuss the tactics to be adopted. At this point, Robert may have realised that it was not simply a matter of receiving the keys of the promised town. A siege would appear to be required since it was obvious that the Norse were not going to come out. 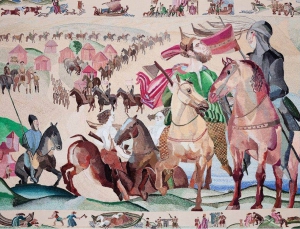 Dermot Mac Murrough, King of Leinster, had his hopes fulfilled at last when, in May 1169, a small band of 30 knights and 360 soldiers landed quietly on Bannow Strand, in the south of Wexford.

The Knights – of Norman / Welsh extraction – were nearly all related to each other. It was something of a family adventure, the Irish undertaking; many had little to lose in Wales, and hoped to improve their individual lot in answering Dermot’s call for help.

The equipment, horses and armour and supplies, is hauled up on to the shore. The knights’ leader, Robert Fitzstephen, is seen being greeted by Dermot and his followers, they having rushed from Ferns to meet them.

The Walling of Ros 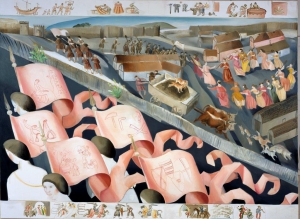 From its foundation in 1207, the prosperous ville of Ros was protected from outside invaders by Leinster’s chief Gaelic family, decendants of Dermot MacMurrough and kinsmen of William Marshal, the town’s founder.

However, when trouble struck, it came from the Normans themselves. Walter de Burg waged war on Maurice FitzMaurice FitzGerald and fierce battles broke out in the streets among the protagonists. The outraged burgers decided to have a fosse thrown around the town to protect themselves. Hired help was slow so the burgers, guild by guild, took over the task of digging out a ditch 20 feet wide to stretch for a mile around the town. What drew the world’s attention to this feat was the fact that a young poet – whose interest in the display of the ladies of the town – who gallantly worked on the fosse on a Sunday – caused him to write in Old French – an account of the entire enterprise. The original document of the poem is extant and is housed in the British Museum where it has excited much interest.

Published in Panels of the Ros Tapestry
Read more...
Page 1 of 2