The Walling of Ros 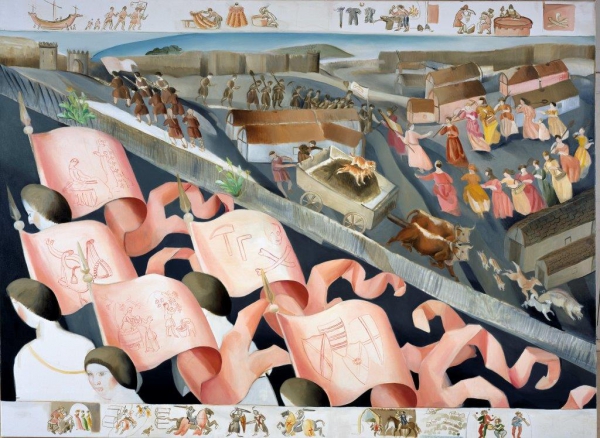 From its foundation in 1207, the prosperous ville of Ros was protected from outside invaders by Leinster’s chief Gaelic family, decendants of Dermot MacMurrough and kinsmen of William Marshal, the town’s founder.

However, when trouble struck, it came from the Normans themselves. Walter de Burg waged war on Maurice FitzMaurice FitzGerald and fierce battles broke out in the streets among the protagonists. The outraged burgers decided to have a fosse thrown around the town to protect themselves. Hired help was slow so the burgers, guild by guild, took over the task of digging out a ditch 20 feet wide to stretch for a mile around the town. What drew the world’s attention to this feat was the fact that a young poet – whose interest in the display of the ladies of the town – who gallantly worked on the fosse on a Sunday – caused him to write in Old French – an account of the entire enterprise. The original document of the poem is extant and is housed in the British Museum where it has excited much interest.

More in this category: « Previous: The Thriving Port of Ros Next: Exchange: the Irish and Normans mingle at the fair »
back to top