The Thriving Port of Ros 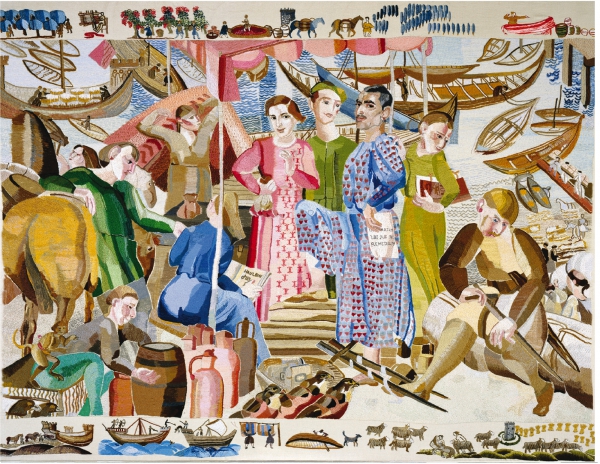 In 1207 William Marshal, now Earl of Pembroke, and his Countess Isabel could at last turn their attention to the needs of the province of Leinster.

A town was planned on the River Barrow, which would fulfil their ambition to open the province up to new avenues of trade at an international level. The illustrious William was in a position to acquire the services of ship-builders, merchants and bankers to develop the various aspects of the port to European standards, and they swiftly ensured that the natural advantages of the area of Ros Mic Treon on the mighty river were fully exploited. Arterial waterways, the Nore and the Suir, fed into the Barrow estuary allowing water traffic to stretch from the midlands to the sea. Bankers from prominent Italian companies set up financial centres, offering loans, facilitating exports and investing in futures, the latter largely in wool-clips. Wool was the most important single export from the hinterland of Ros. In the centre of the panel, three bankers – a Frescobaldi, a Spini and a Riccardi, preside over the port’s financial affairs.

More in this category: « Previous: Evening: the lighthouse at Hook Head Next: The Walling of Ros »
back to top