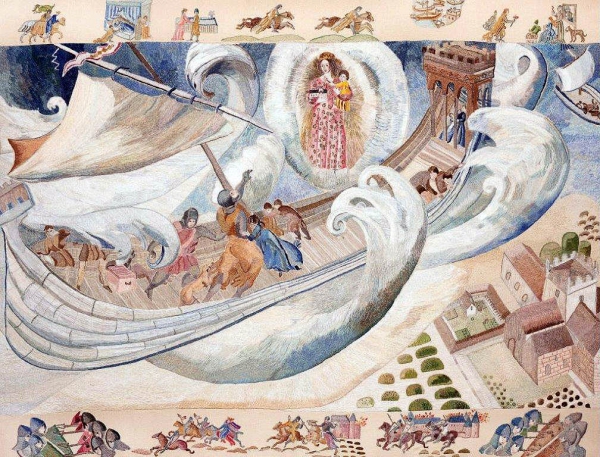 “The Damsel of Striquil” as she was known, was held as a ward of the Crown in the Tower of London from the tender age of four, where her person and her considerable estates were jealously guarded.

In 1189 Henry II gave her in marriage to his heroic and highly talented knight and champion, William Marshal, who, despite his indispensable presence at the side of the Plantagenet Kings for many years, had little material possessions. In 1200, William finally achieved permission from the distrustful King John to set sail for Ireland with his wife and children, two of his sons being held hostage in England by John. During the voyage, a violent storm erupted in the Irish Sea, threatening to overwhelm the Marshal’s ship and the accompanying flotilla carrying horses, servants and supplies.

In the panel, William is seen comforting a daughter and standing in the eye of the storm vowing that were they spared, he would build a Cistercian abbey where the ship made landfall. And so it came to pass. Tintern (Minor – to distinguish it from the earlier abbey in Wales) came to be built in Saltmills, south Wexford, in a sylvan setting, by a small stream.

More in this category: « Previous: The Marriage of Isabel de Clare and William Marshal Next: Hunt in the Forest of Ros »
back to top