The Siege of Wexford 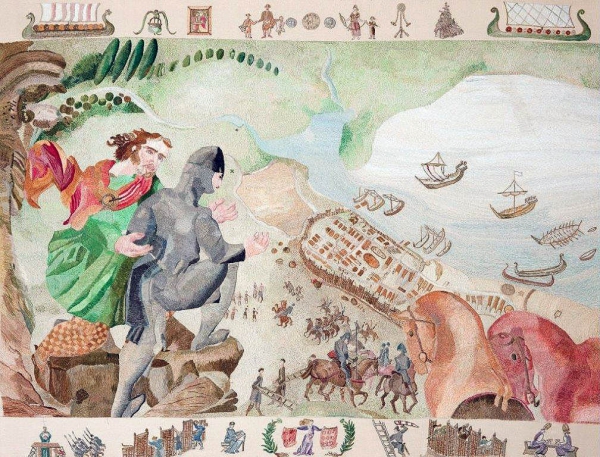 Dermot MacMurrough, King of Leinster, and Robert Fitzstephen, with their combined forces of Irish, Norman, Welsh and Flemish combatants, bear down on the first target of their campaign, the Norse town of Wexford.

The Leinster town had been promised by Dermot MacMurrough to the Norman leader Robert Fitzstephen and his half-brother Maurice Fitzgerald during negotiations in Wales. There were some striking weaknesses in the fabric of this offer. Dermot did not own the town. It had for 300 years been a Viking town, a city state, quiet independent and owing only token dues to the Irish Kings of Leinster. It’s economical and religious life was rooted outside Ireland to a great degree.

In the panel, Dermot and Robert Fitzstephen halt on high ground above the town and discuss the tactics to be adopted. At this point, Robert may have realised that it was not simply a matter of receiving the keys of the promised town. A siege would appear to be required since it was obvious that the Norse were not going to come out.

More in this category: « Previous: “Arrogant Trespass”: the Normans landing at Bannow strand Next: Battles in the Kingdom of Ossory »
back to top